The city of Zeus 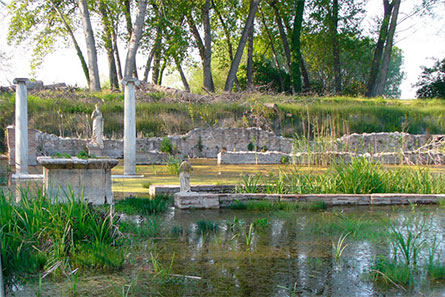 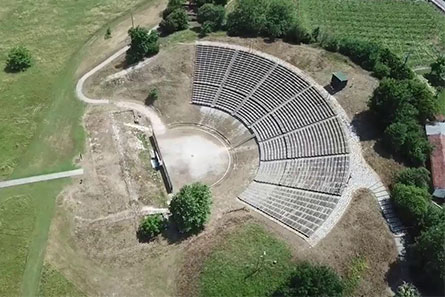 Dion (former name Malathria) is a large settlement in the municipality of Dion – Olympus and belongs to the prefecture of Pieria.

Dion was an ancient city of strategic importance and one of the most famous Macedonian states. The geographical location of ancient Dion is placed at the eastern foothills of Mount Olympus, where the homonymous town of Dion is located today. As Strabo and Livy testify, Dion is not a city on the seashore of the Thermaic Gulf in the foothills of Mount Olympus, but seven stadia away’. The first written reference to Dion is in Thucydides, who mentions it as the first city through which the Sparta general Brasidas passed in 424 BC.

The city seems to have been founded by the Perraevans of Thessaly, in honour of Zeus (according to the historian Dimitsas). The name of the city is attributed to Zeus. Every year there were annual “Zeus” festivals, with the temple of the father of the gods at the centre. In Dion, the Olympic Games were held, as well as victorious celebrations and sacrifices… The inhabitants were also called Dioi, Dies and Dias. The first month of the Macedonian year was called Dios. The city was also associated with Orpheus, as a tradition states, that the last one was killed by Dion’s women and a stone hydria with his bones was positioned in that place.

The English colonel and traveler William Martin Leake, who stopped at Dion on December 21, 1806, was the first to identify with certainty the site of ancient Dion and make it known to science.

The remains of the city are located about 4 km from the sea. Archaeological research in the area began in 1928 and continued in 1973 under the supervision of Professor Dimitrios Pantermalis. The archaeological excavation brought to light the Sanctuary of Isis and other gods of Egypt, the small temple of Hypolybdis Aphrodite, the ancient Sanctuary of Demeter, Hellenistic theatre of the era of Philip V, Roman theatre of the 2nd century, a stadium, the mansion of the god Dionysus with its magnificent mosaics, a cemetery, shops, stone columns (in the temple of Zeus), a conservatory, walls, musical instruments (such as the hydraulis, a wind instrument) and baths.

Since 1983, an archaeological museum has been operating in Dion, where all the findings of Dion and the rest of Pieria are exhibited. The museum houses finds mainly from Dion but also from Olympus and other areas of Pieria, such as Pydna and Rytini. It has three floors in sections, depending on the areas or sites where the finds were recovered.

The exhibition includes statues, votive and funerary monuments, architectural elements, coins and various other objects, which were discovered in the sanctuaries, the great baths and the necropolis of Dion, as well as finds related to everyday life in the ancient city of Dion.