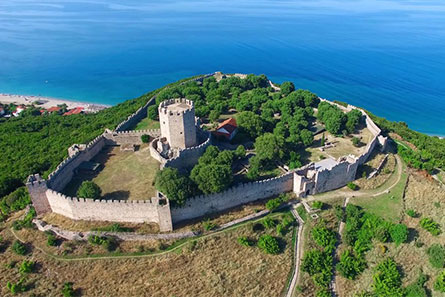 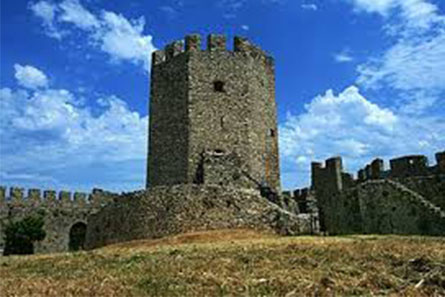 The Castle of Platamonas is a castle of the Frankish occupation, which was built on the site of a fortified town in the Middle Byzantine period. It is located southeast of Mount Olympus, in a short distance from the current town of Platamonas, at a strategic position that controls the Macedonia – Thessaly – Southern Greece road. It is the best preserved castle of north-central Greece, with its impressive main tower dominating the National Road.

The castle is built on the site of ancient Heraklion (or Herakleia). In the Pseudo-Scylaka Periplous (4th century BC), it is referred to as ‘the first city of Macedonia, Herakleion’. Recent excavations have brought to light pottery of Euboic, Early Corinthian and Geometric period origin from Eastern Greece, which indicate the presence of Greeks perhaps from the 8th century BC. The place name Platamonas was first mentioned in 1198 in a chrysobullo of the Byzantine emperor Alexios Komnenos I.

After the Fourth Crusade (1204), with the entry of the Franks into Greece, Pieria was ceded (as part of the Kingdom of Thessaloniki) to Boniface the Mompferatic in 1204. The castles of Citrus and Platamonas were granted to his knights. The castle of Citrus was taken by Virich von Daun and the Lombard Rolando Pike or Piskia took Platamonas.

The last one built there the castle , somewhere between 1204 and 1222, on the order of Boniface, on the site of the Middle Byzantine fortification, in order to control the passage from Macedonia to Thessaly. Also, Latin churches were founded in Platamonas and Kitros, with a Catholic bishop (in Kitros the Catholic bishopric would last until the occupation of Macedonia by the Turks at the end of the 14th century). There is a reference to this in the Chronicle of Morea.

Around 1224 the Castle of Platamonas was conquered by Theodore I Komnenos the Duke, when he overthrew the Frankish Kingdom of Thessaloniki. The castle was then under the control of his brother, Manuel Komnenos Duke. Then it was annexed to the Despotate of Epirus by Michael Duke. After the Battle of Pelagonia (1259), it was captured by the Emperor of Nicaea, Michael VIII Palaiologus, and served as a prison for the Franks who had been taken as prisoners in that battle. Platamonas has been used as a prison again for the rebel Zealots, in 1345, when they were defeated by Apokaukos.

The castle was first occupied by the Turks around 1385, but soon came into the possession of the Venetians. During the operation to recapture the castle from the Turks in 1425, the Venetians were overwhelmed and more than 100 Turks were burned alive inside the castle. After 1427 the Venetians lost control of Platamonas Castle again when the Turks consolidated their dominance. The fact that the castle was not destroyed by the Turks seems to be due to its strategic importance, since it served as a base of operations against the rebels of the neighboring Olympus.
The castle is described in a diary of the Venetian captain Angelo, who was arrested by the Turks after a naval battle between the Venetians and the Turks in 1470. Azolio writes that on 9 August (1470) the Sultan spent the night near a castle called Platimonia, from which someone can see the bay and the city of Thessaloniki.
At the end of the 18th century Platamonas was a chariot village, led by Tsaknakis, while Georgakis Olympios also served as commander.
In 1770 the castle was occupied for a short time by the Greeks, as well as in 1825 and 1878. It was bombarded by Captain Sahtouris in 1897 and since then it was abandoned by the Turks.
On 15-16 April 1941, a New Zealand battalion clashed with German units in the area of Platamonas and the battle ended with the retreat of the New Zealanders.
Today it belongs to the 9th Ephorate of Byzantine Antiquities and it is open for public visits.